The other day I got asked to look into burning a smaller bootloader (Optiboot) onto an Arduino Pro Mini to save some space on it for actual program code. I used an Arduino Uno as in-system-programmer (ISP) to get the job done. I think there are plenty of sources that document this, but I wanted to keep track of my progress and share my findings.

Programming the Arduino Uno to Serve as ISP

The first thing to do is set up the Arduino Uno as an ISP. To do so connect the Arduino Uno to your PC (I’m on Windows) as you normally would and in the examples section open ArduinoISP. 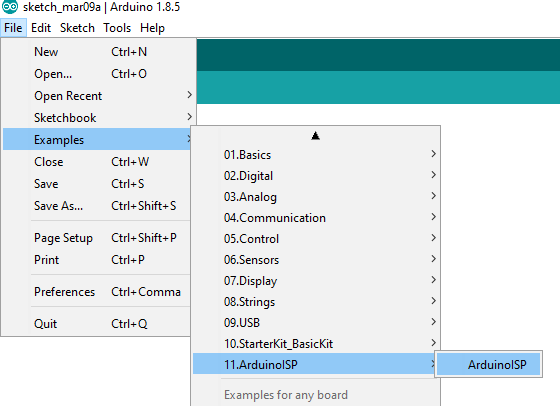 In Tools -> Board select Arduino/Genuino Uno and upload as you would upload any other script to the Uno. 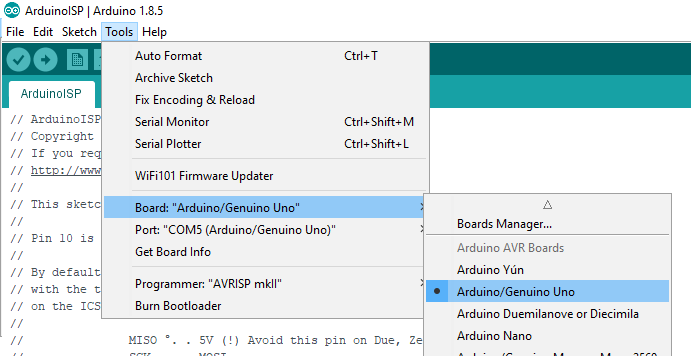 The Arduino Uno is now an in-system-programmer you can connect with any AVR compatible microcontroller (like the Arduino Pro Mini or other Arduinos) to program it.

In my case I had to solder some headers onto the Arduino Pro Mini to be able to connect the pins I need to connect, which are: VCC, GND, RST, MISO, MOSI. 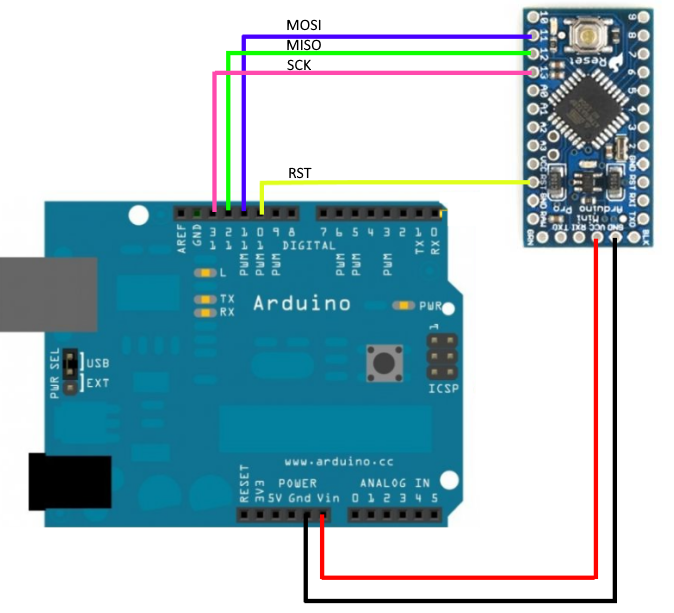 VCC and GND are for power, RST is the reset line, SCK is a clock line (Serial Clock) and MISO and MOSI are for hooking up the Pro mini as a slave device of the Uno. MISO stands for: Master Input Slave Output and MOSI stands for Master Output Slave Input.

Burning a Bootloader (Not Optiboot)

Once the wiring is done the following settings need to be made to flash a bootloader to the Pro Mini:

The following section serves only as a bit of background that was part of my process in figuring out what bootloader I burned. It didn’t get me there directly, but is still interesting.

I went to File ->  Preferences and enabled verbose output during both compilation and upload:

Here you can clearly see that it simply runs avrdude with some of the settings we provided in Arduino IDE along with a reference to some configuration file named avrdude.conf. This is interesting, but the command itself doesn’t tell me which bootloader I just burned nor does the configuration file it references.

I figured that I could modify the avrdude command provided in the log to specify a specific bootloader should get the job done. After some quick googling I found something along these lines should work for a hex file named filename.hex:

I had to wrap the file path in double quotes because of space in the path and even though I didn’t have any hex file named filename.hex I would see the following in the output (excerpt):

This seemed promising. Apparently I’m able to upload a hex file this way using the command line by running avrdude.exe with different arguments. However, when trying to flash the bootloader of choice (OptiBoot) I would end up with some verification errors for reasons not obvious to me. I was probably doing something wrong on the command line or using a wrong hex file.

Interestingly there are tools that basically do the same thing: simply run avrdude.exe with some arguments, yet provide a Graphical User Interface to do so because command line interfaces suck if you don’t use them in an automated fashion.

An example of such a tool is XLoader, but that one didn’t work out for me when I tried. Arduino IDE also seems to be doing the same thing: run avrdude.exe to flash the bootloader, so there must be some way to specify which bootloader in it. As it turns out there is a way to do this, but it isn’t very obvious.

Burn Optiboot onto the Pro Mini

The bootloader I wanted to burn is called OptiBoot and can be found at https://github.com/Optiboot/optiboot. It turns that it is even the default for the Arduino Uno, so all I had to do differently when Burning a Bootloader is select the Arduino Uno as board. The first step becoming:

(EDIT: These last two steps that I have striked through are not available in Arduino IDE. I seem to have made an error while documenting these steps. Please refer to the comment section at the end to see what is up. Over there Daniel gives some feedback indicating the mistake. Sorry for any inconvenience)

So, that is it right? Well, I’m not really satisified even though the job is done. If you look at the documentation the answers are there, but what is up with this magic about what bootloader is flashed on what board in the first place?

I dug a bit deeper and learned that there is a place where all the boards are defined. On my system I found the file in:

This is where Arduino IDE specifes which hex file to upload as bootloader and gives a whole new meaning to the boards section in Arduino IDE for me. Let’s look at an excerpt of the configuration for the board we have now selected, the Arduino/Genuino Uno:

It specifies the hex file right there under the uno.bootloader.file configuration value.

At least I found a match between the board and the bootloader, explaining why it works with this board selected. This also gives an opportunity to change the hex file and thus changing which bootloader is uploaded to a specific board. I could go to the config section for the Pro Mini and set this bootloader as the default and not deal with this in the future. Too bad for me this was a one-time job and I don’t care about future calls, but at least it was educational and I got to write this blog post.